History Repeats Itself: North-South Transportation Corridor
Author:
La Crosse Public Library
Creator:
La Crosse Tribune
Description:
Newspaper articles related to the North-South Transportation Corridor discussion from the mid-1940s through 2002. An ever present issue facing La Crosse city planners and officials since the mid 1940s has been the discussion of building a north-south road through the La Crosse River Valley and the wetland area known as the marsh. Follow this controversy from 1946 to the passing of an advisory referendum in 1998 blocking the city from spending money on the road. A north-south corridor is still in the plans of the La Crosse Area Planning Committee and the issue is far from decided. 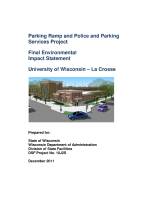