The resources listed below are unique to this page, and fall under this general category. Browse the sub-categories in the carousel above if you are looking for a resource that falls under a more specific topic.

A brief sketch of La Crosse, Wisc'n, showing the location of the place, its surrounding scenery, commercial advantages, early history, and the social, moral, literary, and religious character of the inhabitants; and various other interesting items
Author:
W.C. Rogers
Subject:
United States
Wisconsin
La Crosse
La Crosse (Wis.)--History
La Crosse (WIs.)--Directories
Creator:
Spencer Carr 1811-1880
Description:
this list includes men and eligible women and is not a comprehensive listing of La Crosse residents at the time of publication; it was an attempt to draw young people to the fledgling community on the prairie
Carr was pastor at First Baptist Church 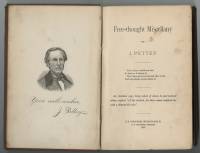 Free-thought miscellany
Author:
C. F. Gillette, Printer
Subject:
Free thought
Creator:
Pettey, J., 1815-
Description:
J. Pettey was originally from England and made his way to the United States, eventually settling in La Crosse, Wisconsin. He plied his trade as a gunsmith and then a market gardener. He is listed as Joseph Petty in the History of La Crosse, Wis. (1881) as being a gunsmith as early as 1861 (p.497). Pettey died in 1893 and is buried in Oak Grove Cemetery in La Crosse, Wis.
Pettey wrote this book primarily expressing his views on free-thought and challenging the existence of God.

History Repeats Itself: Ten Commandments Monument
Author:
La Crosse Public Library
Creator:
La Crosse Tribune
Description:
Newspaper articles related to the controversy of a ten commandments monument located in a public park in La Crosse, Wisconsin. The Ten Commandments Monument was donated to the city and dedicated in Cameron Park in conjunction with a state Eagles Club convention held in La Crosse in 1965. Seen as a religious symbol on public property, a lawsuit in 1985 sparked a court battle between the Freedom From Religion Foundation, led by Anne Gaylor, and the city. The case was dismissed in 1988. The issue resurfaced in 2001 with more local citizen support, and the city sold the small parcel of land where the monument stands to the Eagles Club in 2002.