←Back to Peoples and Cultures

Daily life for a working class woman in Onalaska [manuscript] from the Addie Tripp Papers
Creator:
Tripp, Addie
Description:
Addie Tripp was a single woman, perhaps a domestic servant, who lived with the William Johnson family of Onalaska, Wisconsin, during the Civil War. Her diary describes her daily household tasks for the family and community life during the war. Although the war continued unabated, Tripp's diary is notable for the absence of references to it, revealing its relatively minor impact on a working class woman's daily life. Tripp wrote nearly every day, and her entries slowly chronicle her romance and ultimately her marriage to a local man. The diary volume itself - - a leather-bound book roughly the size of a deck of cards - - included 24 pages of statistical information in the front as well as pages to record one's expenses and other data at the back. We have enhanced the images slightly to make Tripp's penciled entries easier to read. To see a typed version, click "Page & Text" at the upper right while viewing any page.
Addie Tripp Papers. Wisconsin Historical Society. La Crosse Area Research Center (La Crosse SC 106)
Part of the Wisconsin Historical Society's Turning Points in Wisconsin History online project

The Equal Rights Amendment and its Advocates in the Women of Wisconsin
Author:
University of Wisconsin-La Crosse
Subject:
University of Wisconsin-La Crosse -- Students -- Research -- Periodicals
College students -- Research -- United States -- Periodicals
Journals
Women, Gender, and Sexuality Studies
Creator:
Rigotti, Katelyn
Description:
This paper examines the work and accomplishments of the La Crosse County Women’s Political Caucus, which operated as a local branch of the state and national organization. Their purpose was to encourage women to run for state and local office, and to provide support and information on campaigning. They also worked to educate the public on important issues like the Equal Rights Amendment and Affirmative Action. This paper focuses on their efforts to secure the passage of the Equal Rights Amendment for the federal and state constitution. My research is a study of the Equal Rights Amendment, and the way it would have impacted the condition of women. There was a lot of opposition to the Equal Rights Amendment for various reasons. Some people understood what changes the amendment would make, while others were making assumptions. This research dissects the reasons people opposed it and the way proponents failed to correct these misconceptions surrounding the amendment, resulting in the lack of successful ratification.
Published as part of the University of Wisconsin-La Crosse Journal of Undergraduate Research, Volume 21 (2018) 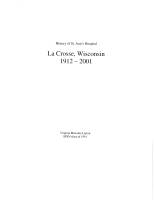 Oral history interview with Maxine Kroner / interviewed by Michael D. Schendel (1 of 2)
Description:
Maxine Kroner (b.1927) was born in Dodgeville, WI, but spent her childhood in La Crosse. In her interview, she discusses topics such as the Great Depression, welfare programs, the North Side neighborhood, Catholicism, private education (Aquinas), employment during WWII, teaching, working as a mother, local politics, the YMCA, the polio pandemic, and vaccines.
Tape 2 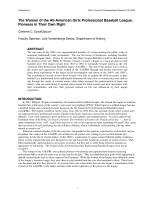 The Women of the All-American Girls Professional Baseball League: Pioneers in Their Own Right
Author:
University of Wisconsin-La Crosse
Subject:
University of Wisconsin-La Crosse -- Students -- Research -- Periodicals
College students -- Research -- United States -- Periodicals
Journals
History
Creator:
GrawOzburn, Clement C.
Description:
The war years of the 1940Ã‚Â’s saw unprecedented numbers of women entering the public realm in numerous traditionally male occupations. The war left scores of businesses, including baseball, without adequate labor. Driven by the fear that Major League Baseball would be shut-down for the duration of the war, Philip K. Wrigley created a womenÃ‚Â’s league as a back-up plan to keep baseball alive. The league existed from 1943 to 1954. It eventually became known as the All-American Girls Professional Baseball League (AAGPBL). The aim of this project was to look at the stories and experiences of the women of the AAGPBL through oral history interviews and relate those experiences to the larger social developments and norms of the 1940Ã‚Â’s and 1950Ã‚Â’s. The examination focused on how these women were able to acquire the skills necessary to play baseball at a professional level traditionally dominated by men; how as women they were able to slip through the cracks of societal norms while others accepted the predestination of home and family; what not conforming to societal norms meant for these women and their interaction with their communities; and how their personal outlook on life was influenced by their league experience. Some of the interviewees were from the La Crosse, Wisconsin, area.
Published as part of the University of Wisconsin-La Crosse Journal of Undergraduate Research, Volume 7 (2004)