←Back to Natural Environment 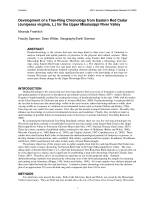 Development of a Tree-Ring Chronology from Eastern Red Cedar (Juniperus virginia, L.) for the Upper Mississippi River Valley
Author:
University of Wisconsin-La Crosse
Subject:
University of Wisconsin-La Crosse -- Students -- Research -- Periodicals
College students -- Research -- United States -- Periodicals
Journals
Geography
Earth sciences
Creator:
Froehlich, Miranda
Description:
Dendrochronology is the science that uses tree-rings dated to their exact year of formation to analyze temporal and spatial patterns of processes in the physical and cultural sciences. There currently is no published record for tree-ring studies using Eastern Red Cedar in the Upper Mississippi River Valley in Wisconsin. Therefore, this study develops a chronology from tree-rings using Eastern Red Cedar (Juniperus virginiana, L.). The objectives of this study were to collect samples from both live and dead trees and to create a tree-ring chronology based on standard dendrochronological methods including skeleton plotting and cross-dating. Creating a master chronology makes this study significant because it adds to the knowledge of tree-rings for western Wisconsin and has the potential to be used for further work in dendroclimatology to assess past climate change for the Upper Mississippi River Valley.
Published as part of the University of Wisconsin-La Crosse Journal of Undergraduate Research, Volume 11 (2008)
The Flora of La Crosse County
Subject:
Botany -- Wisconsin -- La Crosse County
Creator:
Nontelle, Deon
Description:
This thesis deals with the flora of La Crosse County. It is primarily a revised account of the native and introduced vascular plants in the county. Situated in the "Drift-less Area", or unglaciated portion of the state, the area provides a variety of habitats, and a relatively large flora. This work is based on collections made in 1971 and 1972. During these years, collection areas across the county were revisited from April to October. 3200 individual collections have been made and identified. This information was supplemented by viewing the collections made by other individuals that are deposited in the herbaria of the University of Wisconsin - La Crosse, University of Wisconsin - Madison, and the University of Iowa - Iowa City. 950 species representing 120 families have been confirm for the county. The largest family represented is the Compositae with 113 species and the largest genus is Carex with 70 species.

The Midway Prairie Scientific Area
Author:
Crescent Print Company
Subject:
Midway Prairie Scientific Area (La Crosse County, Wis.)
Wild flowers -- Wisconsin -- La Crosse County
Plant conservation -- Wisconsin -- La Crosse County
Creator:
Peterson, Alvin M.
Description:
The Midway Prairie Scientific Area was set aside by the La Crosse County Board of Supervisors to preserve the remnants of a remarkable colony of pasque flower. It is comprised of little over three acres of westward sloping land. Located between Onalaska and Midway in La Crosse County on the west side of Highway 35-53. In 1953 the area officially between part of the county park system, dedicated to the preservation of this colony of pasque flowers.
Morphological and molecular characterization of Mycorrhizal fungi associated with a disjunct stand of American chestnut (Castanea dentata) in Wisconsin
Subject:
American chestnut -- Wisconsin -- West Salem
Mycorrhizal fungi
Creator:
Palmer, Jonathan M.
Description:
Circa 1900 a farmer from the eastern U.S. planted eleven American chestnut (Castanea dentata) seeds on a newly established farm near West Salem in western Wisconsin. These trees were very successful, producing a large stand of over 6000 trees. Since this area was weil outside of the natural range of chestnut, these trees remained free from chestmlt blight., caused by Cryphonectria parasitica, until 1987. Because chestnut trees were almost entirely eliminated from their native range by the early 1950's, no moderm studies have examined mycorrhizae of a mature chestnut forest. To identify putative mycorrhizal associates of chestnut, our approach was two-fold: (1) an extensive fruiting body survey was conducted for 3 seasons that yielded over 400 collections, of which approximately 99 were putatively mycorrhizal, and (2) a below-ground molecular approach was used to generate DNA sequences of the ITS region from rnycorrhizae. To date, 100 root tip sequences have been generated. These sequences are phylogenetically diverse, although all are basidiomycetes or ascomycetes falling into 11 families. In addition, 84 of the 99 fruiting body collections have been sequenced. From these data a website was created, www.chestnutfingi.com, which contains a BLAST searchable database of ITS sequences coupled with pictures of both root tips and fruiting bodies.
UW-L Master's Thesis
Pollen gathering by honey bees in La Crosse County, Wisconsin
Subject:
Bees -- Wisconsin -- La Crosse County
Pollen
Creator:
Severson, David William
Description:
Pollen was trapped from honeybee (Puis mellifera L.) colonies using the O.A.C. pollen trap at six randomly selected sites, one of which was a commercial apple orchard, within LaCrosse County, Wisconsin during the 1977 blooming season. The corbicular pellets were generally unifloral, which allowed for a separation of the pollen species on a color basis. Once sorted by color, each subsample was weighed to determine the relative percent utilization of each species at each site. Slides, used for species identification, were made of each color using the acetolysis technique. Reference slides from known plant species were made and compared to verify the identities of the bee-gathered pollens. A study of the major pollen sources within the county revealed that these sources are quite varied throughout the blooming season. Some of the more dominant and long-blooming species were oak, dandelion, fruit trees, clovers, sumac, corn, buckwheat, and composites. Other species such as boxelder, ash, raspberry, and red-osier dogwood are utilized for large amounts of pollen, but have relatively short blooming periods. The pollen season can be divided into three distinct categories; the early April to late May tree sources, the late May to mid-June shrubs, and the herbaceous species from mid-June through September. A considerable amount of the pollen collected came from supposedly wind-pollinated species, raising some question as to the true nature of pollination vector and flower-form relationships. The bees appear to be inclined to forage from any floral source in the apiary vicinity that offers adequate amounts of pollen. A study of differences in major pollen sources in different apiaries, revealed that the same basic species were utilized at all areas sampled. There were, however, significant differences in the amounts of pollen collected from these species. A noticeable exception was buckwheat, which is not routinely in cultivation throughout the county and as such, was only foraged for pollen in apiaries within flight range of this crop. A study of plants competitive to commercial apple pollination determined that commercial pollination efforts can be severely affected by competitive plants growing in the orchard vicinity. The bulk of the competition was supplied by oak and dandelion.
UW-L Master's Thesis
The quantity and nutritive quality of Vallisneria americana biomass, in navigation pool no. 9 of the Upper Mississippi River
Subject:
Mississippi River
American wildcelery
Creator:
Donnermeyer, Gary N.
Description:
Vallisneria americana Michx. (wild celery) was studied to determine biomass, productivity, and the nutritive potential of all morphological structures. The study area was located in the southern portion of Navigation Pool No. 9 of the Upper Mississippi River. A 2.6 hectare (0.1 mi squared) stand of monotypic V. americana was selected for study. Sampling was done monthly or bi-monthly during the summer and autumn of 1980 and the spring and summer of 1981. The nutritive potential of V. americana was assessed from these samples by determining dry matter, neutral-detergent fiber, crude protein, ash, and caloric concentrations of each plant organ.
UW-L Seminar Paper

Reminiscences of early La Crosse, Wisconsin : an account of the men and women who lived in La Crosse and vicinity ...
Author:
Liesenfeld Press
Subject:
La Crosse (Wis.) -- History
La Crosse (Wis.) -- Biography
Creator:
Pammel, L.H.
Description:
This book written in 1928 is a comprehensive, first person account of people and events in La Crosse in the 19th century by Louis H. Pammel. At the time of publication of this 102 page book in 1928, Pammel was a professor of botany at Iowa State College. His book begins with a general history of La Crosse, a description of the flora and fauna of the area, and his fatherÃƒÂƒÃ‚ÂƒÃƒÂ‚Ã‚ÂƒÃƒÂƒÃ‚Â‚ÃƒÂ‚Ã‚Â¢ÃƒÂƒÃ‚ÂƒÃƒÂ‚Ã‚Â‚ÃƒÂƒÃ‚Â‚ÃƒÂ‚Ã‚Â€ÃƒÂƒÃ‚ÂƒÃƒÂ‚Ã‚Â‚ÃƒÂƒÃ‚Â‚ÃƒÂ‚Ã‚Â™s emigration from Germany and arrival in La Crosse in 1855. The focus of the book, though, is on the people that Pammel knew or had acquaintance of and events that occurred La Crosse primarily in the 1870s and 1880s. There is a name index at the back that was added at a later date. There are no illustrations. Survey of the Flora and Fauna in the La Crosse Marsh, La Crosse County, Wisconsin
Author:
Wisconsin Department of Natural Resources in Cooperation with the University of Wisconsin-Stevens Point
Subject:
Marsh plants--Wisconsin--La Crosse
Marsh animals--Wisconsin--La Crosse
Wetlands--Wisconsin--La Crosse
La Crosse River Valley--Environmental aspects
United States
Wisconsin
La Crosse
Creator:
Lawrence D. Igl
Description:
Wildlife observations and the predominant vegetation recorded in the La Crosse River Valley marsh, La Crosse, Wis., from June 6-26, 1985, including birds and mammals
ocm19551110
Vegetational analysis of the floodplain forests and a floristic survey of Van Loon wildlife area
Subject:
Botany -- Wisconsin -- Van Loon Wildlife Refuge
Van Loon Wildlife Refuge (Wis.)
Creator:
Kordiyak, David John
Description:
The floodplain forest of the Van Loon Wildlife Refuge is located on the bottomlands of the Black River in La Crosse County, Wisconsin. The composition of the tree, shrub and herb strata were surveyed. A total of twelve overstory species were encountered in the study. Acer saccharinum was the dominant species in all stands except one. In that stand, Acer saccharinum was slightly exceeded in importance by Quercus bicolor. Quercus bicolor, Ulmus rubra, Betula nigra and Fraxinus pennsylvanica were secondary dominants and considered important species. Each species was present in all stands. The average tree density in the bottomland forest was 367.8/ha. The 22 average basal area/ha and basal area/tree were 27.1 m and 0.08 m , respectively. The shrub stratum did not appear to be important in the Van Loon Wildlife Refuge as indicated by low values for frequency and estimated percent cover for all species. Sambucus canadensis, Ilex verticillata and Zanthoxylum americanum were the most prominent shrubs encountered. Shrubs reached greatest importance in openings within the floodplain forest. Ninety-two herbaceous species were encountered while sampling. Sixty species occurred with a frequency of at least 1%, and Laportea canadensis was the dominant herb. Viola papilionacea, Galium aparine, the family Gramineae and the genus Carex were also important. A vascular flora of the Van Loon Wildlife Refuge was compiled during the ecological sampling and on reconnaissance trips to the different communities present in the bottomland habitats and areas adjacent to the Black River. Three hundred sixty-five species, representing 88 families, were collected. Two hundred thirty-eight species from 67 families were found in bottomland communities. The remaining species were found in upland communities adjacent to the Black River.
UW-L Master's Thesis