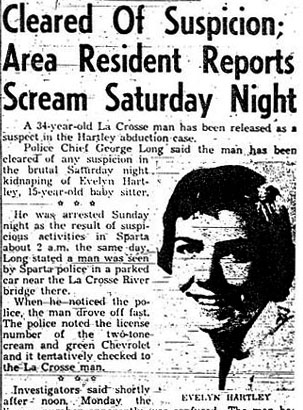 History Repeats Itself: Evelyn Hartley
Author:
La Crosse Public Library
Creator:
La Crosse Tribune
Description:
Newspaper articles (1953-1997) related to the disappearance of babysitter Evelyn Hartley. Hartley was a 15-year-old high school student who disappeared from a home on La Crosse's south side during a babysitting job in October 1953. Evidence suggested that Evelyn was taken against her will, but despite diligent efforts on behalf of the police, sheriff and other law enforcement agencies, this case has never been solved.