←Back to Businesses and Industries 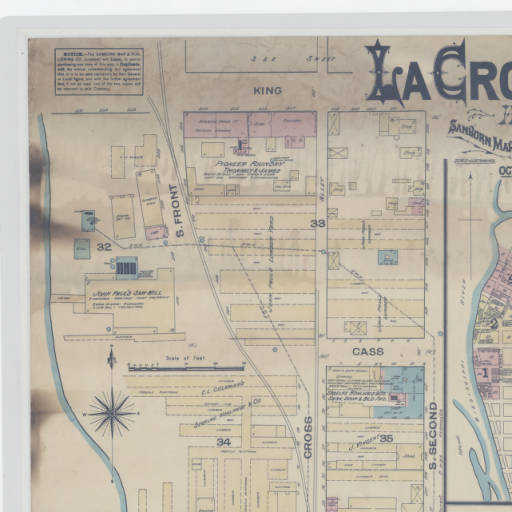 Fire Insurance Maps of La Crosse, Wisconsin, in the Digitized Collections of the Wisconsin Historical Society [fire insurance maps : 1879, 1884, 1887, 1891, 1894 [lumber districts only], 1906, 1921 [partial]]
Subject:
La Crosse (Wis.)--Buildings, structures, etc.--Maps
La Crosse (Wis.)--Maps
Wisconsin--La Crosse
Fire risk assessment--Wisconsin--La Crosse--Maps
Description:
Sanborn Fire Insurance maps are meticulously detailed, large-scale lithographed, color-keyed street maps. Sanborn Maps helped insurance agents in the late 19th and early 20th centuries determine the degree of fire hazard associated with a particular property. Sanborn Fire Insurance maps typically focus on the business districts within communities. Features include street names, street and sidewalk widths, property boundaries, locations of fire hydrants, locations of water and gas mains, and the names of most public buildings, churches and companies. The maps also document the strength of the local fire department and the presence of fire hazards such as blacksmith forges, large baker's ovens or stored kerosene, and the existence of firefighting equipment, cisterns or community water works. Rivers, canals, railroad corridors and similar features are also noted. Each map provides a detailed assessment of the buildings within a district. Assessments include an outline of each building and outbuilding, the size and number of stories of every building, the location of windows and doors, fire walls, and indications of sprinkler systems. They note the nature of the business or businesses which occupied individual buildings, sometimes even particular room uses. They list the type of construction and the composition of building materials including the framing, flooring, and roofing materials.

Logger's words of yesteryears
Author:
L. G. Sorden
Subject:
Lumbermen -- Language (New words, slang, etc.)
Loggers -- Dictionaries
Loggers -- United States -- Language -- Dictionaries
Creator:
Sorden, L. G. (Leland George)
Description:
The lumberjack had a language all his own. This logging "dictionary" is an attempt to preserve the terminology of the lumberjack in the early days of logging in the Lake States. - Forward
Isabel J. Ebert is a co-author 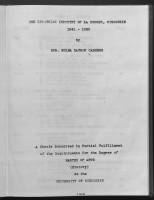 The lumbering industry of La Crosse, Wisconsin, 1841-1905
Author:
Thesis (M.A.) -- University of Wisconsin-Madison
Subject:
Lumbering
La Crosse (Wis.) -- Lumbering
Creator:
Casberg, Selma Sather
Lumbering on the Black River at Onalaska, Wisconsin, 1852-1902
Subject:
Onalaska (Wis.) -- History
Lumbering -- Wisconsin -- Onalaska -- History
Black River Valley (Taylor County-La Crosse County, Wis.) -- History
Creator:
Johnson, Dorothy Sagen
Description:
In the last half of the nineteenth century, the area of West Central Wisconsin became synonymous with logging and the lumber industry. As the forests of this region were being exploited to their fullest, men and women poured into the regions along the rivers which served as highways to the pineries. One of the main centers of activity was an area which encompassed the point at which the Black River joins the Mississippi. At this point, settlers established two rival settlements within two years of each other. One of the cities, La Crosse, became famous as a lumber town; the other, Onalaska, became a "boom town", but never was able to rival her competitor in population or economic growth. The story of La Crosse and her lumbering history has often been related in papers and theses, but the history of Onalaska has been only half told in various civic directories, short newspaper articles, and centennial brochures. Since local history has long fascinated me, and since I am now a resident of Onalaska, I decided to explore Onalaska's early history as a subject for my seminar paper. It soon became evident that Onalaska history was also going to be a history of lumbering on the Black River, since that industry was the reason Onalaska was established. The purpose of this paper, then, is to recount briefly the history of lumbering along the lower Black River, and to describe its effect upon Onalaska from 1852 through 1902. By reading old newspapers, city and county records, and various printed materials concerning the subject and area in question, I believe that I have been able to compile a paper which is both interesting and informative, and academically acceptable as a research project.
UW-L Seminar Paper 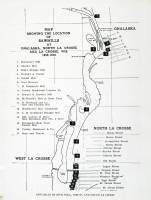 Map showing the location of sawmills at Onalaska, North La Crosse and La Crosse, Wisconsin,1850-1910
Subject:
Sawmills
Maps
Description:
Shows the location and gives names of the sawmills along the Black River and Mississippi River from Onalaska to La Crosse between the years 1850 to 1910.
Map / 2 maps 51 x 41 cm / Black and white.